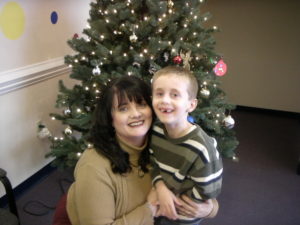 Just as the holidays can evoke a sense of celebration and thanksgiving, they can also bring stress. But for Teresa Hyler, life is less stressful now than ever before, thanks to her 6-year-old son Kaleb’s successful transition to the private day school at the Building Blocks Center for Autism last May.

Teresa says, compared to a public school, Building Blocks provides a much less stressful environment for Kaleb, which, in turn is less stressful for the entire Hyler family. “He actually loves coming to school,” Teresa says. “It’s been so nice not to have any stress at all, because I don’t worry about him while he’s here. He’s happy, he’s learning, he’s growing just unbelievably, just leaps and bounds!”

The Hyler family was first introduced to the Center for Pediatric Therapies through occupational therapy services, which Kaleb began upon the recommendation of his developmental pediatrician. Kaleb’s testing, treatment, and at-home exercises were all individually designed to help improve his fine motor skills. Teresa says, “You could actually see the progress from treatment to treatment.” Primary focus areas were handwriting, being able to grasp a pencil correctly, and using scissors. Teresa says, “Now, that’s what one of his favorite things to do – to draw and to cut and create, and just be artistic.”

When considering alternative schools for Kaleb, Teresa felt that “Building Blocks was the only option for us.” Teresa valued the fact that the Building Blocks school offers one-on-one attention, and that students are all age 12 and under. Most importantly, the school is dedicated to children with Autism Spectrum Disorders.

“[Kaleb] transitioned here so much smoother and quicker than anywhere he’s ever been,” Teresa says. In only a few short months, Teresa has seen improvements in Kaleb’s academic, behavioral, and social skills. In this time, Kaleb has also formed a relationship with nearly all of the Building Blocks staff members. Teresa says, “He’s very affectionate, and when I come pick him up, he has to hug everybody and kiss them

goodbye.” She appreciates that while Kaleb always receives one-on-one attention, he does not always work with the same person. By learning not to get attached to just one person, Teresa feels that Kaleb’s overall potential to interact with others has increased.

Teresa says it is obvious that the skills Kaleb is learning at Building Blocks are “spilling over from school to home.” She has noticed that Kaleb’s ability to interact and communicate with other children has improved in a range of environments, from restaurants to the soccer field to Boy Scout meetings.

The holidays are usually the toughest time of year for the Hyler family, but this year, the Building Blocks staff has helped by sharing social stories with Kaleb so he can understand the excitement of the holiday season. Teresa says, “It’s really been nice to have a support system behind the parents.” Teresa has also found support through attending monthly parent meetings and getting to know parents of other students. She says, “It’s not like you just drop [your child] off here. It’s kind of like one big family.”

The changing seasons and upcoming holidays bring many adjustments for everyone. For instance, as the weather gets colder, we wear warmer clothing; we travel to spend more time with family and friends; we change our eating habits; and we experience changes in routine. Children with Autism Spectrum Disorders experience these same changes and require specific and consistent coping skills to aid in successful transitions.

In an effort to increase tolerance to wearingcoats and other warm clothing, it is important to expose children with autism to these items of clothing and routines as soon as possible. Increased exposure to an upcoming change will result in less sensitivity and struggle for the child with autism as well as the family. A social story or video model may be helpful in facilitating this change. For examples of great stories on this topic, check out The Jacket I Wear in the Snow or Time to Get Dressed.
Travel can bring added stress to families and children with autism. It is helpful to have highly reinforcing and comforting items available to promote and reinforce positive behaviors. These items may include favorite toys, books, blankets, stuffed animals music, movies, sensory activities, etc. Also, verbal and visual reminders aid in preparing for upcoming travel. We recommend Car Rides as a great story related to travel.
Holidays also bring more opportunities and temptations to eat unhealthy foods. It is important to be consistent with decisions regarding unhealthy foods during the holidays. Family members can help by being supportive and consistent, making family choices together. Check out Good Enough to Eat or Cookie for stories encouraging healthy eating.
Changes in routine can be exciting for some of us, but for most children with autism it can lead to confusion, resulting in increased stress and negative behaviors. Visual schedules in the form of pictures, words, or lists can aid in successful transitions. This takes some extra preparation on the caregiver’s part; however, the result is well worth the effort.
Overall, being proactive and consistent in all decisions throughout the holiday season will benefit the child with autism and the family. In the words of Barbara Coloroso, “our children are counting on us to provide two things: consistency and structure. Children need parents who say what they mean, mean what they say, and do what they say they are going to do.”
– Building Blocks Center for Autism Staff: Nicole S. Walton, BA, Program Director; Courtney M. Adams, BS, Behavioral Director; and Bethany W. Hilliard, MS-Ed, Lead Teacher

The holidays are a fun, but hectic time of year. We get to see extended family, travel to different locations, serve special food, and lose the routine of daily life. Even though they’re not the ones shopping, wrapping, cooking, or driving, children aren’t immune to the stresses of the holidays. To make your holiday season as enjoyable and relaxing as possible, try planning ahead for your child’s meals. This is especially important if your child is a picky eater or has a feeding disorder.
First things first: what are feeding disorders, and how do they develop?
Children with feeding difficulties or disorders do not consume enough food or liquid to grow properly, or have diets limited to only a few foods, food groups, or textures. Some children may eat a more varied diet, but they are unable to maintain attention long enough to sit at the table. Others never make it to the table at all, and instead they walk around during mealtime, or “graze” on snack foods throughout the day. A child with a feeding disorder may have difficulty chewing, swallowing, or tolerating different food groups or textures; chokes, gags or vomits when eating; throws tantrums around mealtime; and/or refuses all solid or liquid food.
There are many reasons why feeding disorders develop, including:
How can I help make holiday mealtime less stressful for my child?
How can I help my child feeding issues, beyond holiday mealtimes?
If your child displays signs of a feeding disorder, discuss these problems with your family doctor or pediatrician, or contact a speech-language therapist. You can learn more about speech therapy for feeding disorders by visiting our website.